“Determined to help Carlos access the support he so desperately needed, as well as protect him from gang recruitment, exploitation or worse, our partner in El Salvador stepped into help.”

Brought up by his grandmother following the death of his mother, Carlos is one of the estimated 670,000 children in El Salvador whose birth was not registered. When his grandmother also sadly died, Carlos went to live with his father; however, his father’s issues with alcohol dependency meant he was unable to properly care for him and Carlos was soon moved into residential care.

Carlos recalls that this was an incredibly difficult time in his life; he missed home and his family and found it hard to adjust. Eventually, he decided to run away.

Soon after, Carlos found himself on the streets and, with nowhere else to go, he slept there for the night. Nights became weeks, which became months, and Carlos, like many other unregistered street children in El Salvador, went unnoticed by the authorities. Alone, terrified and under the watchful eyes of gang members patrolling the city, he soon turned to drugs to escape the fear and loneliness he felt. 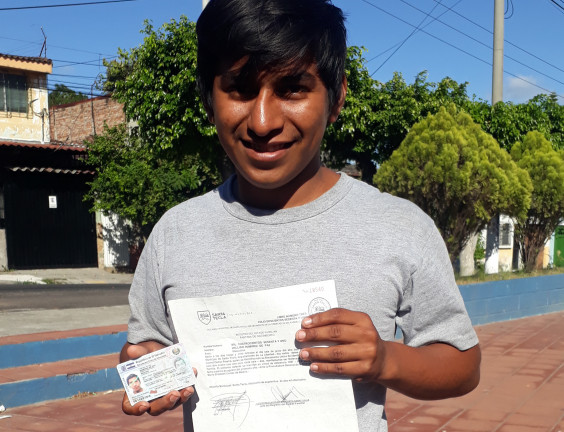 Our partner in El Salvador met Carlos on the streets and learnt about his situation. After gaining his trust, and with his permission, they sought the support of the healthcare services to help Carlos with his substance abuse. However, without his identity documents he was refused care. Carlos explains that during this time he felt worthless and humiliated. “You’re not worth it. You do not matter.” became a phrase imprinted in his mind, believing those around him who told him, “If you die on the streets unregistered, no one cares.” Desperate for a sense of belonging and purpose, as well as needing to earn money to survive, the lure of gang-life loomed over him.

Determined to help Carlos access the support he so desperately needed, as well as protect him from gang recruitment, exploitation or worse, our partner who runs the Birth Registration project in El Salvador took on his case. With no information about his family or the institution he had stayed in, the process of registering Carlos was incredibly complicated. However, through coordination with the National Registry, the team were eventually able to trace his aunt and present his case to the family law courts. And earlier this year, Carlos finally received his birth certificate.

Now he is registered, Carlos’ self-esteem has improved, and he is much more hopeful about the future, telling our partner he dreams of becoming a carpenter. He is currently receiving support through a drug rehabilitation programme and has found a safe place to sleep in a temporary night shelter whilst a more permanent, long-term solution is sought. For Carlos, finally having his official identity has created a fundamental sense of self-worth that has been a vital first step in helping him to believe he is worthy of a life away from the streets - and the gangs that inhabit them.

“With my ID I go to school, I have friends and I want to buy a house for my grandmother and my sisters.”

“I miss Kindergarten, playing with my friends”